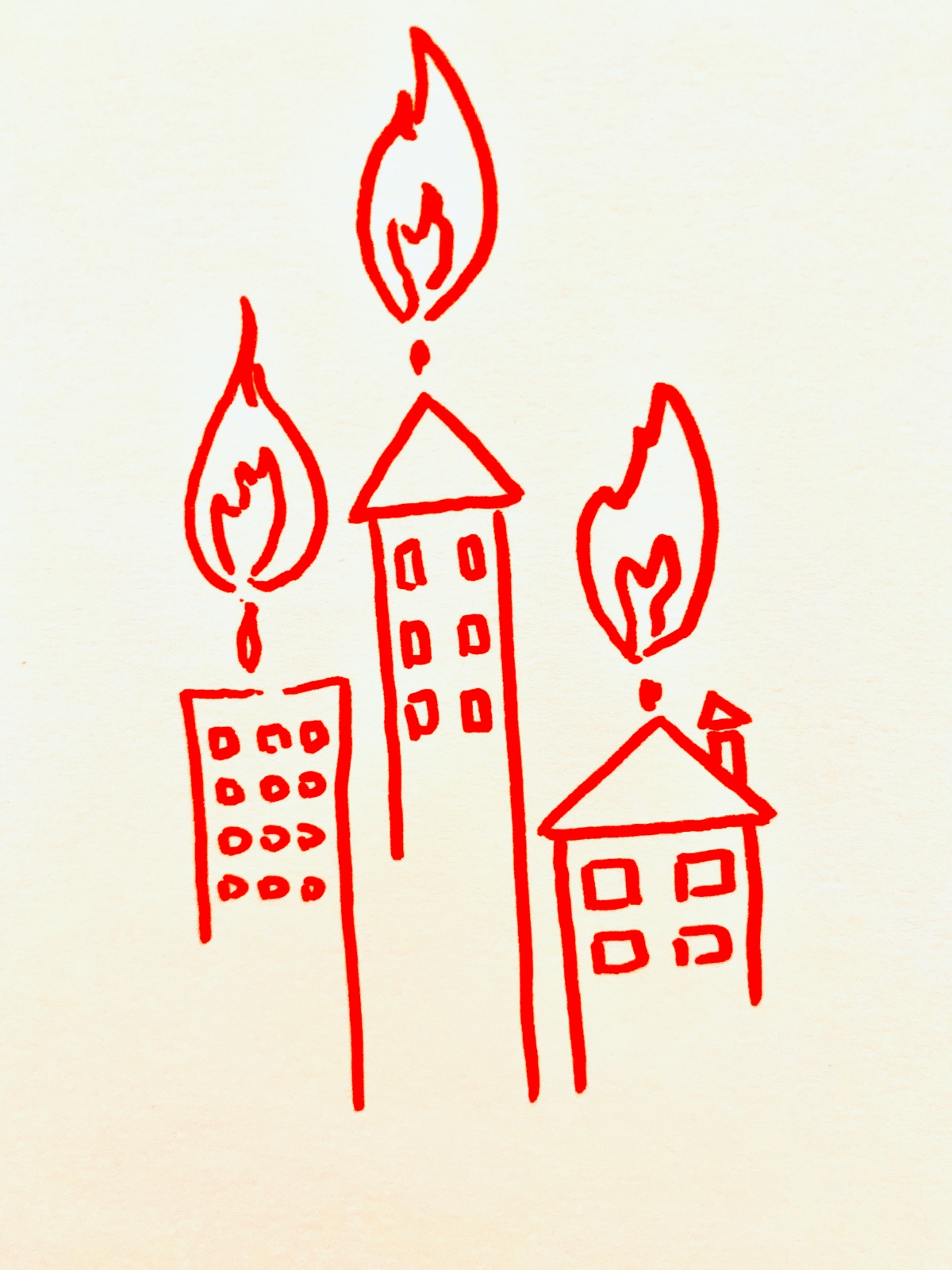 Though he tolerated the meanderings we used to take together as a family, he was at his best after having lugged a heavy backpack over forest trails for days, tracing mountains and beaches with his hiking boots, drawing from the source of perfect solitude and silence.

It was only later that he began enjoying walks of a different nature: the unplanned, unattended, and unencumbered by compos mentis kind. On these he’d turn up at the side of highways with an axe, scratching his head and asking the responding constable where that expletive tree he had to fell was hiding, or asking for Nancy, my mother. Once he’d wandered off, leaving the tap running on the 22,000-litre tank. Days later he called to complain both about the lack of shower water and the length of green patch that had erupted on the paddock. Such things attract snakes, he’d said. From the cottage to the closest shop might have been seven kilometres, but he walked it. Blazing heat, not so much as a bead of sweat, not even when he commanded that responding constable to mind his own expletive business.

END_OF_DOCUMENT_TOKEN_TO_BE_REPLACED

Today I’m going to pass on a secret that’s been in my family for at least a generation or two, and show you how to whip up a batch of Nonna’s homemade gnocchi which, aside from being the cheapest gourmet-sounding meal this side of the poverty line, is the only thing I ever learned how to cook with conviction and mild success; apart from scrambled eggs on toast, which I still fuck up on occasions.

But before we get started I want to give you a bit of background info. First of all, I swear. A lot. A gift from my father before he went the way of all alcoholic diabetics with a monumental appetite for refined sugar. I also have a birthmark on the back of my left thigh shaped like the Eiffel Tower, or an ice-cream cone; it depends on how far I bend over.

As for the recipe, it all came from my Nonna—a stringy old bird from the north of Italy who, like many folk after the war, found herself on a boatful of other white-looking immigrants bound for Australia to work their arses off and get called a bunch of ‘good-for-nothing wogs’. She was the only one in those days who’d bothered to learn any English, which made her pretty popular around the markets and hospitals and courthouses and anywhere else where monolingual Italians used to turn up with any frequency.

Nonna was of the old school of cooks: she could march into any kitchen, sift through the shit on the shelves, and with nothing but a handful of flour and a stern look, cook a decent family meal, or a snack for passing Nazis, and by three-thirty in the afternoon she’d have the whole house licking their lips and loosening their pants asking where the nearest couch was. Depending on which day you caught her, her skills in the kitchen were either a talent, a gift, or a wicked burden. But whatever her mood, she’d never tell you to do up your fly and get up off your bloody culo until at least the coffee had been served. And no one, except my mother and sister, had to help her do the washing up. Thank Christ for that. And no matter who you were—friend, neighbour, dentist, rude man in line at Medicare—she’d touch you on the cheek or on the shoulder when you spoke to her, because she knew that everyone needed something extra, something tactile, to show that other people were listening to them, and she’d leave you with some nugget of wisdom or down-to-earth advice, even if it involved the best way to take up a pair of men’s trousers.

Okay, so I’m painting a pretty rosy picture here—she might have whacked her kids around a bit, and shot a few of the neighbours’ dogs because they pissed on her azaleas—but she was generally alright, and I have never understood how, from such a sweet lady as my Nonna, came the rancorous crab monster that is my mother.   END_OF_DOCUMENT_TOKEN_TO_BE_REPLACED 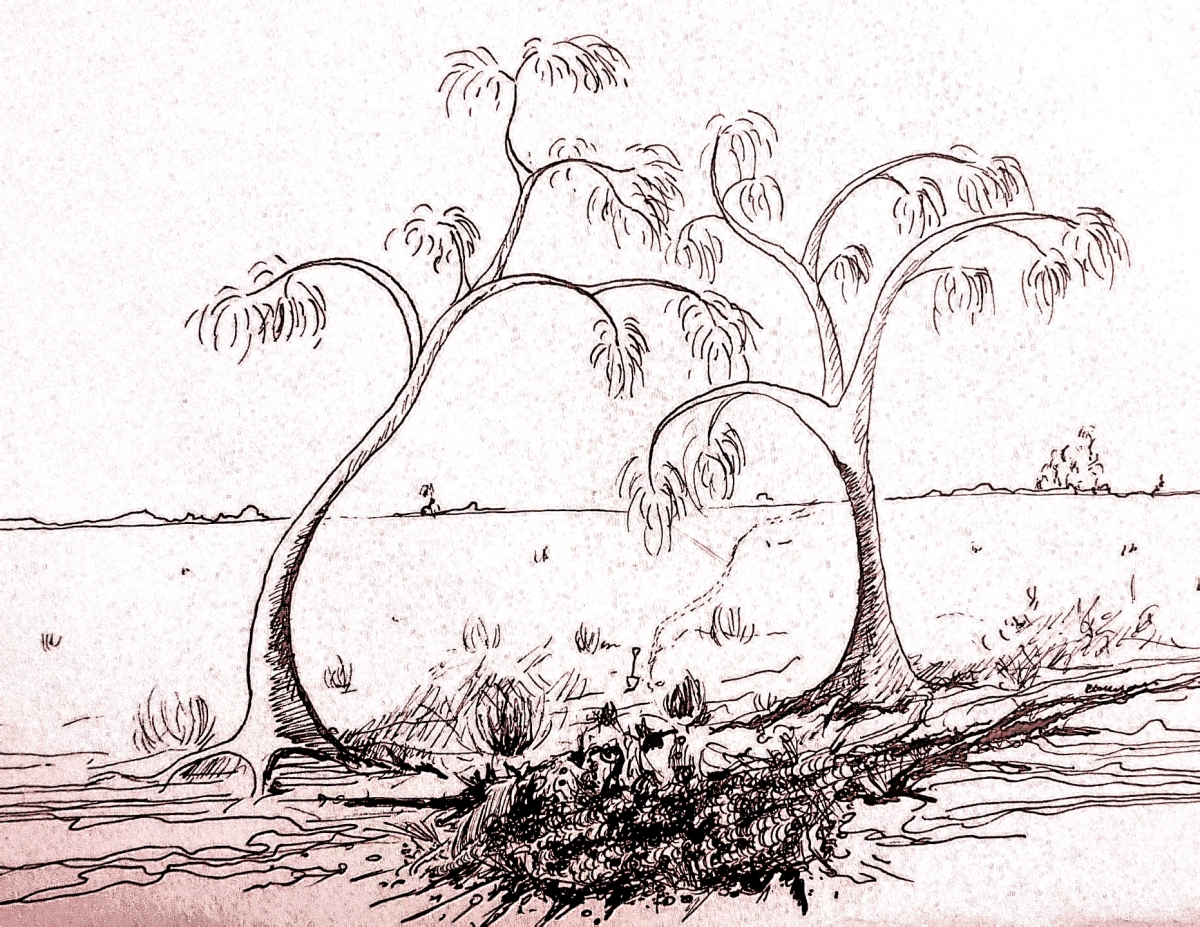 A battered car door leaning against a highway sign announced in spray-paint letters Hugh Singh’s arrival in the EXTRATERRESTRIAL OUTBACK.

After crossing the invisible border, he eased his foot off the accelerator, lowered his window, and gazed across at the ochre and khaki ensemble of hillocks and flats, low bushes and grasses. Nothing in the landscape moved.

The town was a collection of one-story buildings and windless treetops huddled along a single, tarred road. Heat shimmered from the roofs of parked cars, a bright sun offered no respite for shadows. Hugh stopped outside the pub, consulted the map, checked the time, ran his hand over the ventilation outlet as he leafed through a loosely-bound folder of photos and hand-written notes. He threw the folder onto the back seat as a man approached the car. The man’s eyes were lost in his dark face, and his lips were blistered.

“Welcome, brother,” the man said, revealing a trio of milk teeth. He wiped a patch of dust from Hugh’s bonnet with his hem of his shirt. “Nice to get visitors in town. Wash your car for five bucks.”

END_OF_DOCUMENT_TOKEN_TO_BE_REPLACED

‘Such heat!’ said the Commander, fanning himself with his hat. The two uniformed men at the front of the bus made a panicked show of fiddling with the air-conditioning levels and redirecting the fan grills. ‘I’d forgotten how searing the heart of this country is. Positively Hadean. What can we do about this heat, Dickie?’

Dickie put down his pen, twisted the top off a bottle of sparkling water, and handed it to the Commander.

‘No, no. I mean this,’ the Commander said, and tapped on the window. ‘The dying trees, if you can call them trees. The red dirt. I say, it is little wonder that so few of our citizens care to venture this far inland when the whole place burns like a kiln. They say they used to come in droves, by the millions, to tramp around an unadorned slab of rock, and eat flies by the dozen. Spend their own monies to do so! And now the railway line we built from the capital lays dormant and warping under the sun. How much did it cost to build?’ Dickie opened his mouth but the Commander held up his hand. ‘Never mind. Don’t remind me.’

END_OF_DOCUMENT_TOKEN_TO_BE_REPLACED 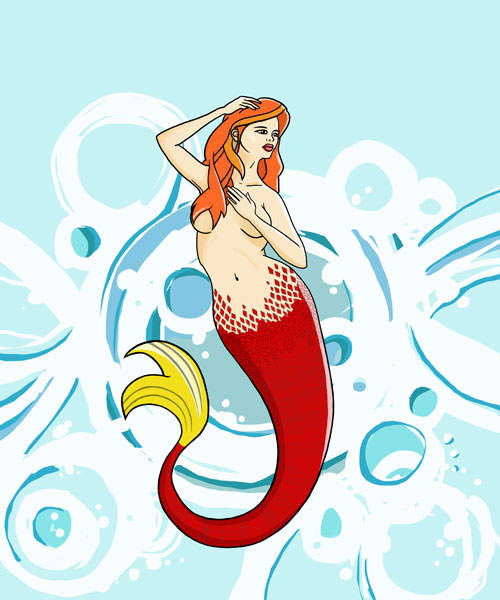 Once a month the universe tosses him a get out of jail card; allows him a ruffle and a blow dry from the sopping subaqueous saga, and shines a torchlight on the shores of hope.

He was never overly dramatic, but he can’t help but chortle and whistle as he sloshes from the waves onto the wet rocks, pinches his cold cheeks, and shakes his gills in anticipation.  END_OF_DOCUMENT_TOKEN_TO_BE_REPLACED 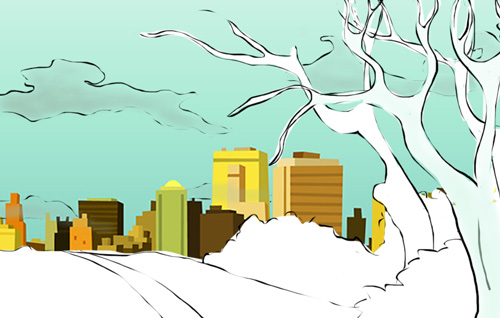 When the tyre blew, there was no explosion of rubber. No extended hiss.

No sudden slump in the cab, or grinding of rim on rock. Nothing to indicate that the wheel had put up a fight. Only an unsatisfying and noiseless wobble, an deflationary apology for having left me perched perpendicular to the descending mud track, and enveloped tip to toe in mountain forest.

It was eleven past midnight. END_OF_DOCUMENT_TOKEN_TO_BE_REPLACED

The accountant’s wife has seen ghosts before—Bhut they are called in her home country—and she remembers the very mischievous one who would come crawling down from the mango tree, her bangles clanging in the night, and slip through the crevice in the wall at the foot of her bed; the one her mother insisted brought luck, though it often caused the young girl to wet the sheets. At times the apparition resembled her father, featureless and bloated. On other occasions it was a witch with black teeth and a pulsating, red bindi. No more than pedestrians passing through the nightly imaginations of a child, her mother had said. But to the wife, they were real.

As real as the one for whom she is now preparing tea. END_OF_DOCUMENT_TOKEN_TO_BE_REPLACED

The meeting took place in the lower dining room of Dario’s. Plastic lemons, fake aspidistras, clogged toilets… an infelicitous atmosphere for anything other than privacy.

The others began wamping one at a time into the WC. The pilot, the failed rocker, the one-eyed politician, the medieval librarian, the knife-throwing accountant. They stumbled out of the cubicle, arms and heads gyrating as though wrestling invisible octopodes, and hung their jumpsuits on the wall, over the yellowed paintings of Naples. We were as different as we were the same—lined faces, crooked legs, clipped fingernails—our universes had left their signature marks, but still we shared the same misanthropic grin, the same, simple acknowledgement that life will not only take capricious and inconvenient twists, but will do so at every opportunity. END_OF_DOCUMENT_TOKEN_TO_BE_REPLACED

Short chapters inspired by my new, coming of age novel, Sandbanker, available at no bookstores near you (yet)

The bell at St Christopher’s was not a real bell, made of brass or anything, but electric — it droned, like the torpedos in River Raid. (I didn’t actually have an Atari 2600 to test the theory, and didn’t really know anyone who did, at least someone who I could ask, but that’s what I’d heard.) Whoever they’d gotten to ring the school bell on that Friday afternoon had morsed-coded ‘S-O-S S-O-S’, and everyone had a good laugh about it, but I would’ve bet a case of chocolate frogs they had no clue what it meant. END_OF_DOCUMENT_TOKEN_TO_BE_REPLACED