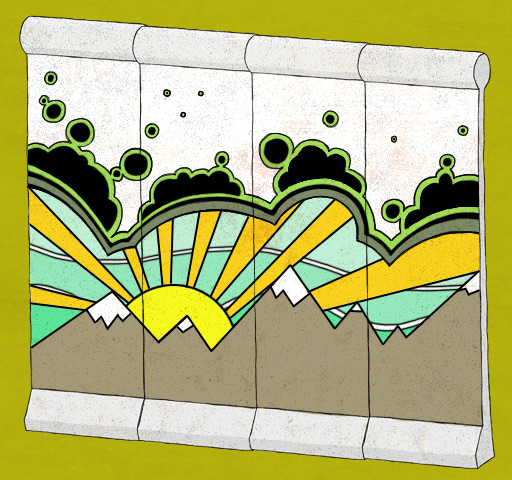 Transitory, on ice and breath, a sweeping movement of a coffee-stained Frankfurter Allgemeine. The check-in announcement screams at me as I exit arrivals, stone faces, no signs. Where is my welcoming party?

Thirty hours of cracking your bones in seat 32F and this is what you get, though it might be what you deserve. Nobody’s going to come to get you in GMT+1 except the stipple dreams that you coloured for yourself when you thought it was OK to exchange everything that defined you for a one-way ticket.

@germanforayear Taxi smells like pretzels. How do u say ‘I need a f**king smoke’ auf Deutsch? #jetlagged

“Oh yeah, I’ve got a job,” I tell my prospective and inquisitive flatmates. “A good one. Steady. There’s a Playstation in the toilets.” I slouch around the room as if I don’t need it, imagining where my piles of trendy European winter attire will hang; probably just underneath the exposed wires, or on the tastefully erected IKEA clothes rack, which stands trembling in the corner. The rent is less than you’d pay for  a bottle of fancy wine in the suburbs back home, and comes with its own Bauhaus poster.

So it’s now four square pegs in a Berlin hole and instead of going round and round and round, waking up, kissing… her… on the cheek and flailing in a grey linen ocean ten hours each day. I’m choking on my own ingenuity, and posting the miracle of the working holiday visa on every wall, stream, and ‘Bitches please’ meme.

Just woke up and headed for beer and wurst in the park. Flashback

Everyone loves the new Australian; he’s funny, he does pre-, during- and after dinner drinks like a boss. His attempts at learning German are endearing, especially before he’s about to puke in the cab, or run down a fist-shaking lifetime conformer on a stolen 7-speed racer. Friends explode, doors open, the soul is resurrected by the Berlin vampire.

The first one tells me she grew up on a farm, on a Polish doorstep… or something. “I went strawberry picking near Brisbane,” she says through a lung-full of cannibas smoke. “Bris-bayne, that’s how you say it, nicht wahr?” Nicht wahr.

The second one chides me, shakes her head at my life decisions. Chasing the concrete ice cube into the EFC, a.k.a the Mediterranean sinkhole, a.k.a, the European Financial Crisis. The sun’ll still be there when I get back. So will the god-damn beaches and helium-dosed disc jockeys talking to anyone who’ll listen in that crusty underworld, where mono is the new continental – at least as far as suitable prefixes for the world ‘culture’ are concerned. One of them, the third or the fourth, invites me to stay with her parents for the weekend. I still can’t remember her name.

You are now friends with Julia Weiß.

Oh yeah, that was her.

I’ve learned to ask people I’ve never met if they want a double shot of espresso in their milky lattes. Things are moving up for this chump. “Go burn your tie”, I advocate to the guy who’s urinating next to me. “I did. It’s the best thing you’ll ever do. Free like a trip on the U-Bahn.” He thinks this is pretty funny coming from a foreigner. There’s more where that came from I want to say, but before I can, my groin vibrates.

1 new message
I MISS YOU

5am. That makes it… plus ten, minus daylight savings, and inevitable delays due to packet loss over the Indian ocean (the Earth’s magnetic field?) my thumb is moving to the call button. Don’t do it, you’ll regret it, don’t…

“Hello?” she says. I don’t even get time to shake.

Casually I mention that I’m helplessly inebriated in one of the more trendier Berlin bars. She says that she’s happy for me.

“I’m on the train heading over the bridge.”

“I’m happy for you,” I say and wink to myself in the mirror. What a hero.

“Are you having fun over there?”

Am I having fun? Haven’t you been paying attention down there in your stultified colony? I’m the Chancellor of Funland, baby. New age, post-modern, ‘tell it to me in three-line prose in the dark room of a nightclub’ sort of fun.

“Yeah.” The word stretches from my mouth like mozarella.

But I’m on the other side of the wall, in the city of dynamite angels; the grass is greener, green as a young eucalypt against a sheet of summer white. The light is flickering, but I can just make out this year’s self-portrait: mixed media, with chalked skin and charcoal eyes, two blue gummy bears where my pupils used to be. In the cracked mirror  I realise I look nothing like my passport photo.

@germanforayear When was the last time you saw the sun rising over the Pacific? #selfishbastardsinc

7 thoughts on “@germanforayear: Travel and social media won’t change you”