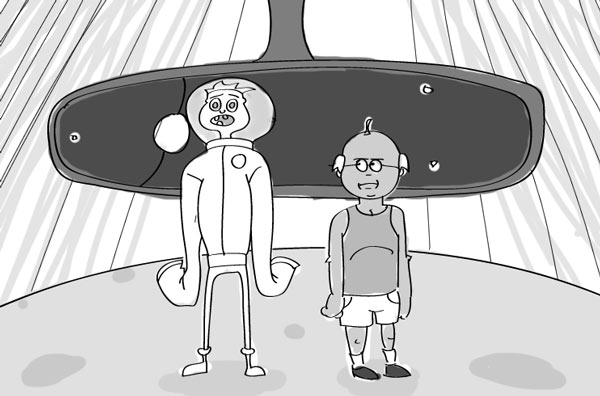 “Explain to me, just once more, this exquisite irrationality of why I’m not allowed to see my daughter. I’m not an appropriate role model? Ha! How many two-hundred-dollar-an-hour sessions did it take to conjure up that delusion, Diana? I-” But I was forced to interpret the beeping in my ear as her answer, something at which I had become rather adept. A mid-sentence hang up, Diana’s signature valediction, meant one of two things: that whatever counterargument she had prepared in that gorgeous head of hers was too weak to put forward or that she hadn’t thought of one at all. Sometimes by fifth or sixth beep, when I imagined her leaning against the stove, regretfully toying with the number pad of the telephone, I understood that she still loved me – and that gave me comfort, if not a sizeable measure of moral elevation. Which reminded me: I was out of rum.

“Don’t take it so hard,” said the man in the spacesuit. He had fallen into my cab at the airport, waking me from my mid-morning repose and demanding that I take him to the quay. “We all have bad days.”

I smiled weakly. Such platitudes, so loved and so generously supplied by the simpletons I ferried around the city, were the primary torment of my job. “Yes, but do you count yours in powers of ten?”

“Don’t you want to know why I’m wearing a spacesuit?”

“The question hadn’t occurred to me, sir.”

The man thrust his head over my shoulder. “Could you turn right here? I want to avoid the major intersections.”

“You don’t seem like the typical cabbie. Don’t take this the wrong way, but you look more… educated and, well, native. What’s your background?”

“Ah-ha!” The man leant back, nodding in approval, or it could have been admiration, I didn’t have time to process the wallow face in the rearview mirror before a blooming whoosh sounded, like a distant jet engine. Then a sudden force yanked the steering wheel from my hands and propelled us into the side of a parked delivery van.