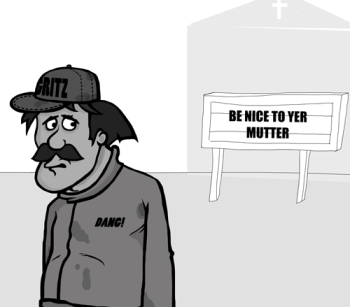 Everyone is muttering in Forks. Fans have even gone so far as to travel from all over the world to Washington State to join in on the muttering and find out for themselves if it is really so common as the Twilight books portray.

There are many things in life that we don’t want to do, like cutting the toenails of the elderly and feeding our baptist neighbours’ narwhals, but sometimes we just have to.

We might need the money or are forced into compliance by mafia gangsters. We do these tasks therefore, as one would say, unwillingly.

Charlie is a good father and tries his best to raise Bella in a responsible and supporting manner. He knows there’s nothing illegal or immoral about muttering to his daughter. It could be that, while everyone is indeed sick of the all the muttering going on, he is bound by contract to stick to the script he was given.

I wrote a book! Get it on Amazon.
Join 267 other followers